This is a non exhaustive and always evolving list of projects I am producing, managing, touring, representing.
Please get in touch if you’d like informations about these projects or others.
All pictures are © of the artists. 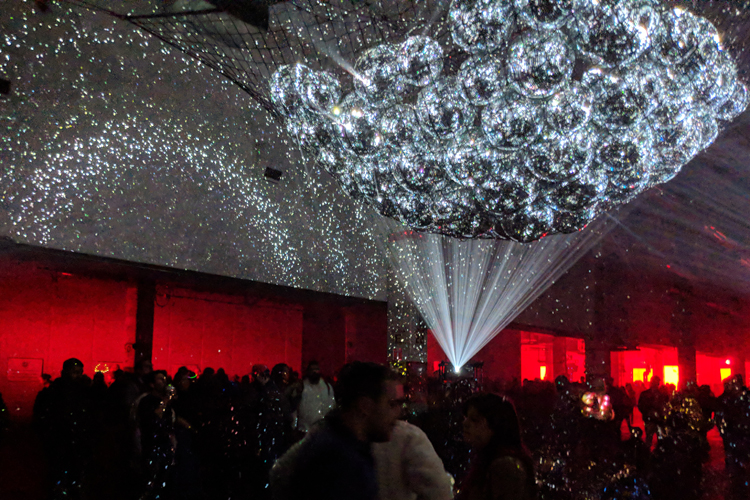 -audiovisual installation-
Sound design by Robert Clouth
The mirror ball, an iconic light technology used in night clubs since the 1920s, becomes  a new kind of visual instrument that can transform our perception of space. Code artists Kyle McDonald and Jonas Jongejan combine multiple projectors, a computer vision system and 180 kilograms of mirrored spheres to create a sophisticated choreography of reflections.
As we enter the space, we find ourselves under a gleaming sculpture of mirror balls that instantly demands all of our attention. But as time passes by we start to pay attention to the multiple reflections covering every surface. They adopt different patterns and organize in multiple configurations and geometries. With every different pattern, they transform the environment, making it sometimes meditative, and other times eerie.
link to video
article in Colossal 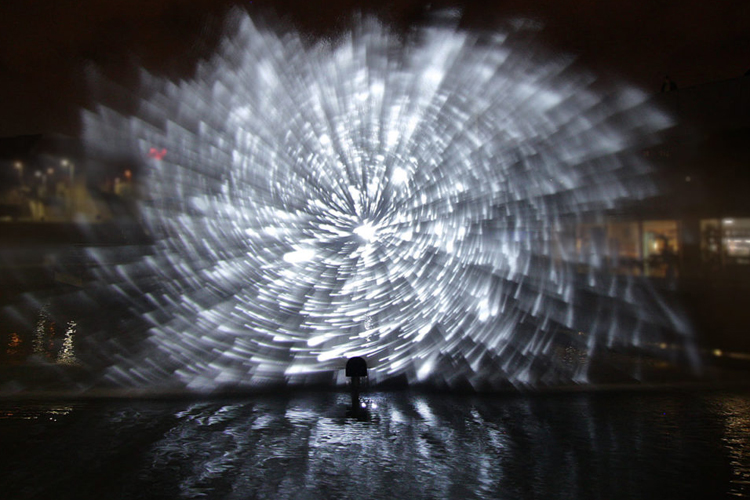 Constellations by Joanie Lemercier
-audiovisual show on a water screen-
With Constellations, the environment becomes a gate for the exploration of the cosmos. The 3D like visuals will allow us to move from the heart of a black hole into deep space, travelling through planets and stars, as we look for the limits of the universe. Constellations is a fascinating journey where the vectorial, monochromatic aesthetics of Lemercier dialogues with the electronic soundscapes of producer Paul Jebanasam. -text by José Luis de Vicente. 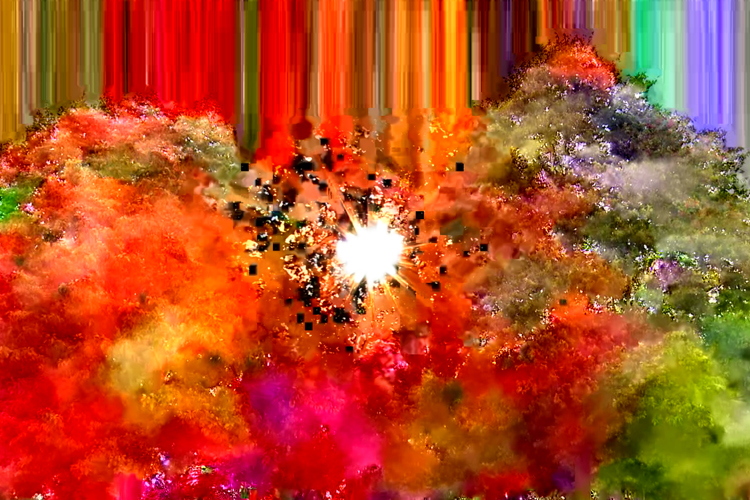 Hypersoleils by Jacques Perconte and JB Dunckel
– audiovisual stage performance –
JB-Dunckel, half of the known french band AIR and Jacques Perconte, video artist of colors and landscapes have created this audiovisual dialogue between improvisation and wild run.
Perconte recorded and filmed Normandy: its sky, forest, grass, waves that he then compressed via his digital palette to extract its essence.
During the performance, hyperrealism becomes a new form of impressionism. Pixels are melting and dropping on the screen while Dunckel’s music transforms into a musical surge coming from the seventies. Normandy landscape becomes a new raw matter from which thousand of suns are raising and dazzling.

-audiovisual installation-
Fuji is part of Joanie Lemercier‘s ongoing artwork series on volcanoes. It combines a large scale hand drawn landscape depicting the Fujiyama, augmented by a layer of projected light. The abstract narratives are inspired by the legend of Kaguya Hime, a folk-tale from the 10th-century
and a key element in Japanese culture. It gives an imaginary and poetic vision of this story in an immersive environment.
link 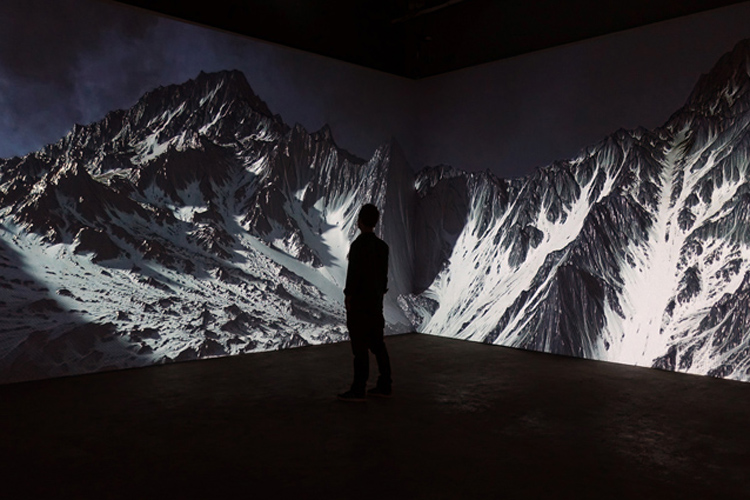 – silent installation –
This piece is part of the Wallpaper series, immersive installations using a printed landscape applied on a wall augmented with a layer of projected light.
These living panoramas are made with simple algorithms. How do we connect code and nature? And what if our reality could be recreated, simulated with mathematical functions?  This topographies, appearing to be a view of peaks, canyons and valleys, are in fact a single grid mesh distorted by an algorithm. A layer of projected light brings the panorama to life: clouds, reflections, shadows, and the illusion of depth blurs our sense of distance. Days, nights and seasons unfold beneath our eyes, distorting our perception of time and space. 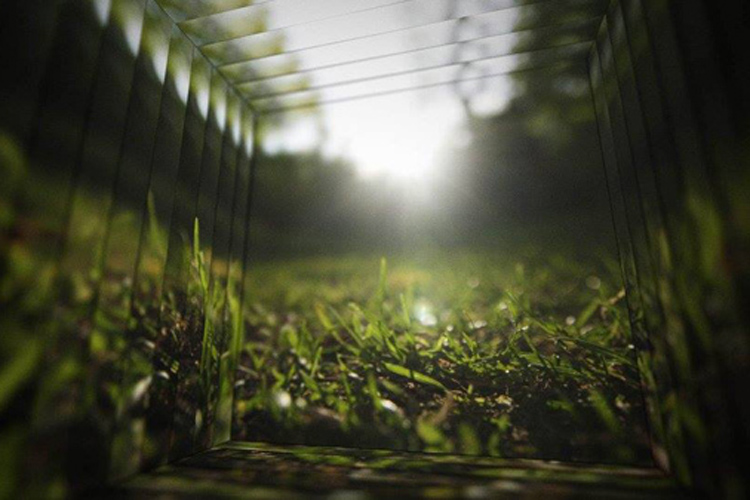 Immersio by collectif Immersio
– VR performance –
Immersio is an interactive performance that immerses the participant in a lucid dream, a world that drifts from reality to abstraction and questions the role of the body and its perception in the digital space. Wearing virtual reality goggles and headphones, the user « dives » into a virtual ambulatory space. This installation is the opportunity to question the language and grammar of virtual reality. Immersio offers an individual, intimate experience. An attempt to redefine the relationship between the participant and the artist, through an experience that mixes live performance, visual arts and digital arts. Intended for a single viewer. 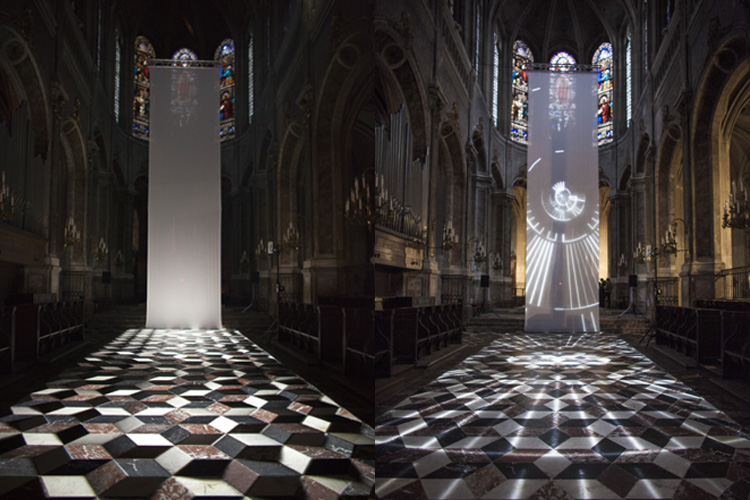 – adaptable audiovisual installation –
Blueprint is a project by Joanie Lemercier, and sound artist James Ginzburg.
The first iteration was made as a site specific installation in March 2015 for STRP biennale in Eindhoven.
The concept of Blueprint is to develop a visual language over several iterations of the piece as installations, facade mappings, performances, …
Some parts are always different but the story to be told has the same structure.
The work interrogates the notion of blueprint as the intersection of ideation and architecture, a map that leads from formlessness to form. It explores the view of architecture as both the endless repetition of the cosmic order, and as a shelter from the infinite, a human construct that brings the capriciousness of nature into perspective.
link